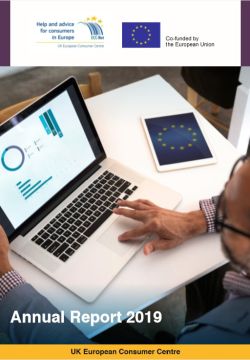 The UK European Consumer Centre (UK ECC) helped almost 10,000 UK consumers in 2019, according to its newly published Annual Report. They joined the almost 100,000 other UK consumers already helped since the centre’s inception in 2007.

This was against a backdrop of Brexit, which probably made 2019 the most challenging in our 12-year history.

Brexit meant that UK consumers continued to want the reassurance of the support and mediation provided by a specialist service such as ours. It meant that the intervention and case handling we provided was perhaps more important than ever for them as they saw the UK move into a future outside the EU. And it meant that our relationships with other consumer protection stakeholders played crucial roles in helping UK consumers in their disputes with EU traders.

Most UK consumers who used our service last year either found us via the internet (42%) or they were directed to us from the Citizens Advice Consumer Helpline (32%). The consumers we helped were spread right across the whole of the UK, including Scotland, Wales and Northern Ireland, with a higher proportion coming from Scotland than any of the other devolved nations.

UK consumer problems come in all shapes and sizes and cover all manner of topics, from personal effects to jewellery, clocks and watches, from timeshare to accommodation services and from games, toys and hobbies to audio-visual equipment.

Read on to find out more.