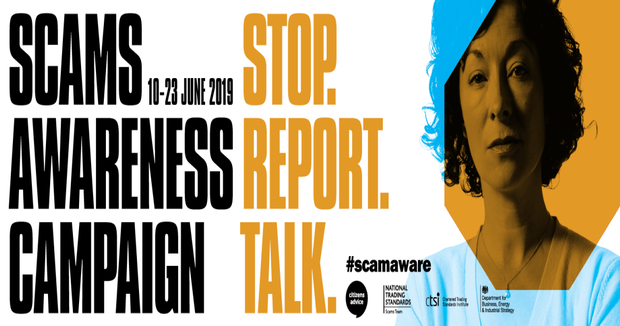 The message, to encourage people to: ‘stop, report, talk’ if they think they have been targeted by a scam or fraud, is the cornerstone of the 2019 Scams Awareness Campaign.

Scams can come in many forms and often involve the internet. But tried-and-tested scams still pose a huge threat, according to figures released as part of the campaign. Classic tactics include mail and cold calling.

Scams Awareness is a yearly campaign which aims to create a network of confident, alert consumers who know what to do when they see a scam. This year's campaign takes place over two weeks, from 10 to 23 June.

Citizens Advice (part of the Consumer Protection Partnership within the UK) found that, despite an overall increase in online scams, more than half (58%) of scams reported to it in the last year were using these well-established methods.

Andy Allen, service director at the UK ECC, said: “Scammers can target unsuspecting people using increasingly sophisticated and manipulative tactics, but it is also true that the ‘tried-and-tested scams’ still pose a big threat. Scams can originate from anywhere across the EU, which means that UK consumers can either fall foul of scammers whilst visiting Europe or from the comfort of their own homes (by post, phone or the internet or email).

“It is unfortunate but true that once somebody has fallen victim to one scam, they are much more likely to be targeted by other scammers. These consumers can end up on a list which is sometimes circulated amongst scammers.”

For more advice about avoiding scams, check out the UK ECC’s website.